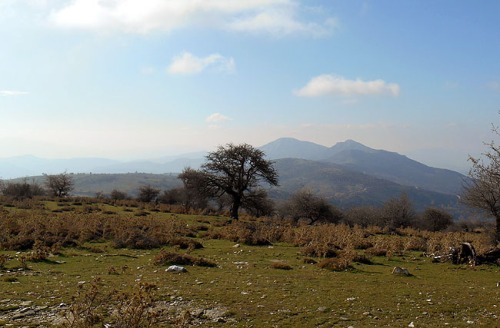 We still have material to post about our trip to Istanbul but, last Sunday, we climbed Kaplan Dağ with Zirve mountaineering and extreme sports club. It’s quite a tough walk with some scrambling at times, but no actual climbing involved. Which is a good thing. Hilary is not good at climbing. The steep, muddy paths left us with aching legs for several days. A challenging walk but not so challenging as to be miserable…

It was a lovely walk in good company with some totally amazing views.  The weather was perfect for walking – bright sunshine but not very warm.  Yes, the weather here has turned ‘colder’ for a relative value of ‘colder’.

One thing we were very glad of was our hiking poles. We bought some rather expensive poles when we were in the UK last spring. That was just after Hilary hurt her ankle so it was not till autumn that we got the chance to use them.  Maybe it was because we’d left it so long, but, although we clearly remembered the salesman demonstrating how to deploy and fold them down for storage, we couldn’t get it right.  The first few walks we did, the sticks tended to collapse at unexpected moments.  That was no big deal as they weren’t really needed until the Kaplan Dağ walk.  We watched a video on the internet which clearly showed a metal button that keeps the poles in place when deployed and allows them to fold when you don’t need them…  We couldn’t find the button.  Until, just before we set off last Sunday, it suddenly appeared, but not were it was shown on the video.  We assume we have an older model, but it is good they are now fully functional.

So we had sticks for the mountain – ones that supported us when we needed them and folded away neatly when we did not. 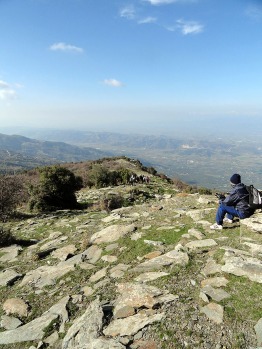