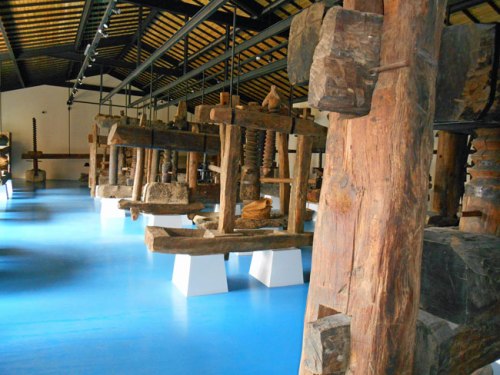 Last week, in the course of a shopping trip arranged for us by a friend with a car,  we were treated to a visit to the olive oil museum which is in the grounds of the Değrımen at Davutlar.  The restaurant itself has an excellent reputation – somewhere to try on a special occasion.  There is also a small tea garden on the lake where we sat and watched the swans and listened to the geese for a while.  There is a children’s zoo with opportunities to pet various animals and they also do pony rides.  So it would be an excellent place to visit with children.

What interested us, though, was the museum, which shows the production of olive oil from Roman times through to modern days.  There are dioramas of Roman’s crushing olives and extracting oil.  There is a wonderful collection of old wooden olive presses.  Clearly assembled as a labour of love.  Each one slightly different.  And then there were the steam presses (sadly not working when we visited but still…..steam).

There is also a shop which sells organic produce.  The bread, we can assure you, is delicious! 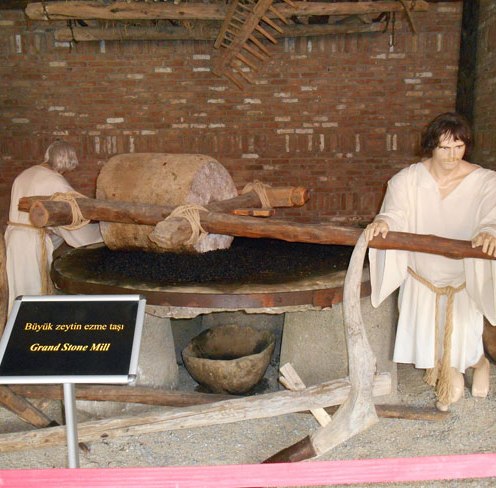 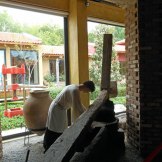 Posted in Food and drink, Tourism

We visited Knidos last year and posted about it here.  This year we went back, on the bike.  The road from Datça to Knidos is steep and twisty with lots of potholes.  The views from the pillion were, however, spectacular.

Knidos is beautifully situated.  We started our visit by purchasing a mouse mat in the official shop and eating a mixed toast each in the cafe.  We then strolled around the site, quite slowly, due to Hilary still limping a bit.  The flowers were amazing – everywhere and we saw grasshoppers and lizards.

field of flowers and ruins

Can anyone ID this beastie beyond, a spider.  The body is about the width of my thumbnail.  It made a huge web and has been dining very well.

Posted in Life in Selçuk, Nature

Our first roadtrip this year was to Datça. We were previously there last May – the intention had been to go on the bike but, in the event it wouldn’t start and we ended up hastily repacking to go on the bus. We had a great time there last year and were determined to go again, to do some exploration on two wheels.
The trip down was uneventful. Well, much of the scenery was spectacular and it did get cold around Muğla. The bike, however, behaved perfectly and we made good time.

We’d booked into a self catering apartment which proved to be rather difficult to find though we later noticed that the block could clearly be seen from pretty well everywhere in town. The view from the balcony was wonderful and, although there was some building noise and the electricity in the area was unreliable (probably due to the building work), we were happy with our choice.  There were quite a lot of steps down to the main part of town, the last of which had been rainbowed…

Just after we booked, but before we left home, we heard that the Polis had imposed a ban on drinking on the street in Datça.  This seems to have been variably enforced.  In our favourite bar (the Sunrise, where they play our kind of music) there was no alcohol on the street.  We sat just inside to enjoy our evening beers.  There was, however, no problem enjoying a beer on the beach… 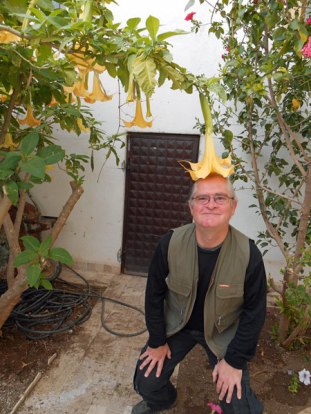 The swallows are back and breeding.  Moths have invaded our felt slippers.  The bike has been for its roadworthiness test, its new tyres and its service.  We are ready for summer and looking forward to taking a trip somewhere that is not an Industrial site in Izmir (where we have to go to have the bike made ready for travel).

There are wild flowers on all the roadside verges – we’ve been flying past so it’s not always possible to identify them – but they do smell fantastic.  In town the wisteria is in full bloom.  And orange blossom.  Both smell wonderful but do tend to irritate the nose.

Rather late this month….

How not to buy a mobile/cell/cep phone

We had been using the same trusty mobile phone since before we moved to Turkey. It used to be Ashley’s and we really can’t remember how long ago he bought it. At least seven years, we think. Anyway, for some time now it has been a bit fussy about charging and, a few weeks back, one of the buttons stopped working. We took it to a repair shop and they said something inside was broken and they couldn’t fix it (so they didn’t charge). Then, of course, that button started working again…

Mobile phones are expensive here in Turkey. We did a bit of research and decided we wanted a Nokia Asha 503 (there are lots of Nokia phones here, spare parts would not be a problem). Initial research led us to belive this would be around 600 lira. We got one in the Uk for £83 – around 300 lira. We thought it would be cheaper but we were wrong….

Not only was it no cheaper but it was also a lot of hassle. Because, first we went to the Vodafone shop in Selçuk to get our previous Turkish sim changed to a mini-sim… This was easily accomplished by putting it into a gadget that looks like a stapler and neatly punched the centre out of the sim. We then went to the tax office to pay 119 lira tax. There we met up with another couple engaged upon the same exercise. Together we returned to the Vodafone shop to be told that they couldn’t complete the registration – we had to go to Aydin or Izmir for that… So we went to Turkcell who told us we could get registered at the Turkcell shop in Kuşadası. Well, that is just a short hop on the dolmuş, so off we went….

After a couple of wrong turnings we found the big Turkcell shop. We queued. We were told we needed another paper, this one from the port. We got the man in the shop to write down the name of the paper we needed and that was a good thing as this name got us through security at the port and into the right office where our last exit and entry into Turkey were recorded and officially stamped (that cost nothing).

We returned to the Turkcell shop where we queued again and discovered there was a problem as the sim is registered in Ashley’s name and we registered the phone in Hilary’s name. This incurred an extra cost (40 lira for the transfer, 19 for a new, temporary sim) to transfer the sim into Hilary’s name.

So, counting the 20 lira it cost the two of us to get to Kuşadası and back, it cost 200 lira to register the phone. That brought the price to 500 lira – still cheaper than the 600 lira we thought it would be, though it did take most of a day to get it sorted out. Then Hilary just googled for Nokia 503 and found that we could have got one here for just under 400 lira…

Look, when this one gives up the ghost, we’re going to TechnoSa.